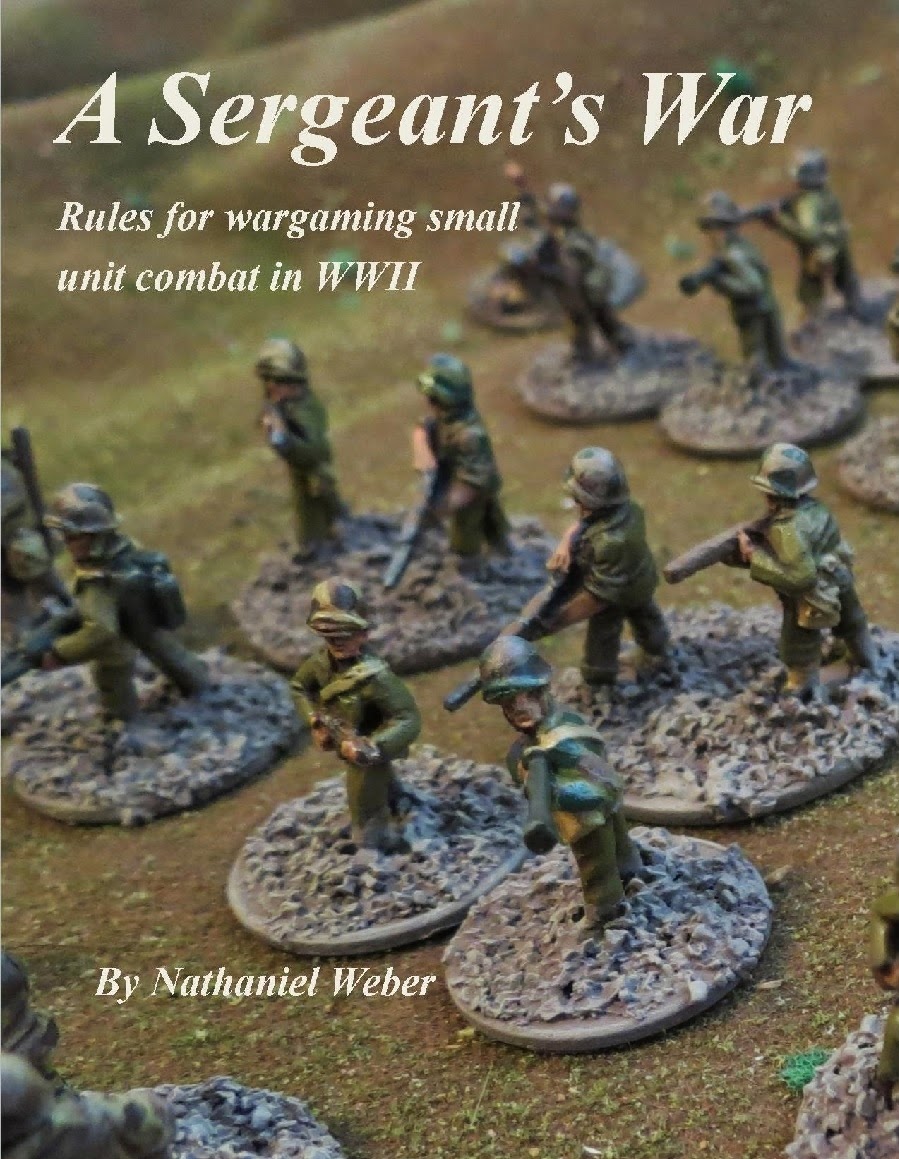 I have just released a new WWII rules set called A Sergeant’s War, intended for small unit combat (platoon+support) with individually- or group-based models.  They are available at the Wargames Vault, here.  Here is a brief summary and a description of the game, given in several parts after the bump.

An overview:  A Sergeant’s War (ASW) is a WWII game which emphasizes morale, unit quality, and small-unit leaders.  The units involved are individual vehicles and heavy  weapons, and sections or squads of troops (4-10 men).  Casualties are tracked individually but troops move and fight as units.  It can be played with any scale of figures, based singly or in multiples, and many games can be played on a small table, like a card- or kitchen table.  Each side usually has 1-2 platoons, plus support.  The game is friendly to solo-play.

“How does the game play?”

Here is a full description of the mechanics used in the game.

Units have Quality and Morale.  Quality determines their ability to do certain battlefield tasks; how many targets they can engage simultaneously; and how easily they hit opponents.

Leaders are either at the squad- and platoon level (for most armies), only at the platoon level (for poorer armies), or all the way down to the fire team/asst. squad leader level (for really crack troops).  Leaders give you the chance to pass morale checks when you might otherwise fail them, but at a price: every time a leader does something in sight of the enemy, there is a small chance that the leader will become a casualty, representing how easy a target the leader becomes when actually leading.

As for how the game plays out, I will go in order of the turn sequence.

1) Check your breaking point:  You count up how many damaged/out of action units are in your force, compared to how many “effective” ones there are; if there are more combat ineffective than effective, your force suffers severe morale penalties.  (Breaking Points can vary.  Some die-hard forces only count destroyed troops as ineffective.  Other, less willing forces count everything from destroyed units, to those that are only pinned down or have only suffered significant casualties.)

2) Rally broken troops:  Troops who are running away may stop and regroup, or might even immediately go back into action.

3)  Remove Pinned:  Pinned down troops can see if they recover from their pinned status.

5) Actions: Going in order, your troops may use Ranged Fire, Movement, Firefights, or a second phase of firing.  The order is important because it simulates suppressing fire and movement.

Ranged Fire:  Infantry roll a number of dice equal to their firepower, which varies from 1 (for a small squad of infantry) to 6 (a belt fed heavy machine gun).  Hits inflict casualties and morale damage.  Targets can become pinned (and lose their ability to interrupt your movement with fire) or can break.

Movement:  Infantry move 8”; vehicles 12, 16, or 20, depending on their speed.  Movement can be interrupted by enemy defensive fire.

Firefights:  “Firefights” represent close assaults—short ranged small arms fire, hand grenades, and possibly hand to hand fighting.  Infantry can generally inflict more casualties in firefights than they can with ranged fire.  Firefights are also decisive—one side or the other will be kicked out of its position.

Second ranged fire:  Units that have not fired yet, or vehicles that have only moved up to half, may now fire.

Infantry cannot move and fire, except to launch firefights.

6) Check for victory, dependent on scenario.

Vehicle combat is a simple “Hit, Damage” system---you roll to hit and then the target rolls a “damage test”, modified by the difference between their armor and the attacker’s AT abilities.  Effects vary from destroyed, to damaged, to morale test.

Artillery is called in, might deviate, and then uses similar mechanics to small arms fire to measure its effects against targets in the beaten area.

“How Fiddly is the Game?”

By my own definition, “fiddly” means how often does a player have to stop the game in order to count things or measure things?  ASW is not very fiddly at all—fire combat is done with three dice rolls (roll to hit; roll to damage; roll for morale), and rarely with more than a few dice at a time.   Measurements are done from unit center to unit center; if your troops are based several to a stand, or if you use movement stands/templates, it goes very quickly.  The basic to hit system is the same for all types of combat (ranged fire, tank fire, firefights).  There are not many modifiers.
“How long does it take to play?”
Because it’s not very fiddly, games play quick.  In one playtest, several first-time players fought out a platoon-sized action in urban terrain in under 2 hours.  For experienced players, combined arms fights can be done in 90 minutes to 2 hours; tank-only fights can be done in under an hour (or even under half an hour).

“What figures can I use?”
You can use any scale figures.  The game was playtested with 15mm and 6mm stuff, but you can certainly play larger; I’d suggest an adjustment to ranges for 25/28mm (increase by 50%) and for 6mm (cut in half).

“What are the basing requirements?”
Because combat is done by unit and not by individuals, basing is highly flexible.  You can use your troops individually and move them as a group (all figures staying within ½” to an 1” of another figure); have your figures sit on movement trays or templates so the whole group can be picked up and moved simultaneously; or have multiple figures glued to a single base.  Casualties are tracked individually, and leader casualties are also important, so you’ll need the ability to mark casualties. (I use nifty plastic skulls from Litko.)

I think ASW is a fun, fast playing game that is reasonably reflective of actual WWII combat.  But I designed the game, so of course I think that.  What might a player not like about the game?

Markers:  There are several statuses (stati?) that require the use of markers on the table top—pinned, broken, damaged, and full speed, and also casualty markers if you have multiple figures per base.

Vehicle detail: Because the game represents the “tip of the spear” and assumes a battlefield 300-500 meters across, a lot of the differences between vehicles common in other games disappear.  Tigers and Panthers are vulnerable to T-34s and everything’s in range.  Long-range gunnery duels and extensive artillery rules as absent from the game.  I have also restricted the data on vehicles to late war stuff (43-45) for the main belligerents; more stats will be available soon.  Update! I've added the stats for early war vehicles, for all the major belligerents.  I've also added infantry platoon organizations for the French and Italians, and some notes on early war German and Soviet squads.

Abstractions:  Hand grenades are folded into short range infantry combat.  Leaders can be killed while doing other actions, representing the general amount of small arms fire in the air.  Some simultaneity is assumed in the game.  Not all players will enjoy the different aspects of the game that I have abstracted to either speed play or try to create a result.

Scenario-driven:  ASW is scenario driven.  I have provided orders of battle, vehicle statistics, special rules, and a section on designing scenarios, but there are no point values or random-scenario generators (though there might well be in future supplements, either for sale or free here).

That’s all the prattle I have today.  I had a lot of fun designing the game and hope that it will find an audience who will enjoy it as well.  Watch this space for announcements of future supplements (I have a Hurtgen Forest book in the works) and for free scenarios for the game.  Thanks!
Posted by Nathaniel at 6:13 AM

Email ThisBlogThis!Share to TwitterShare to FacebookShare to Pinterest
Labels: A Sergeant's War